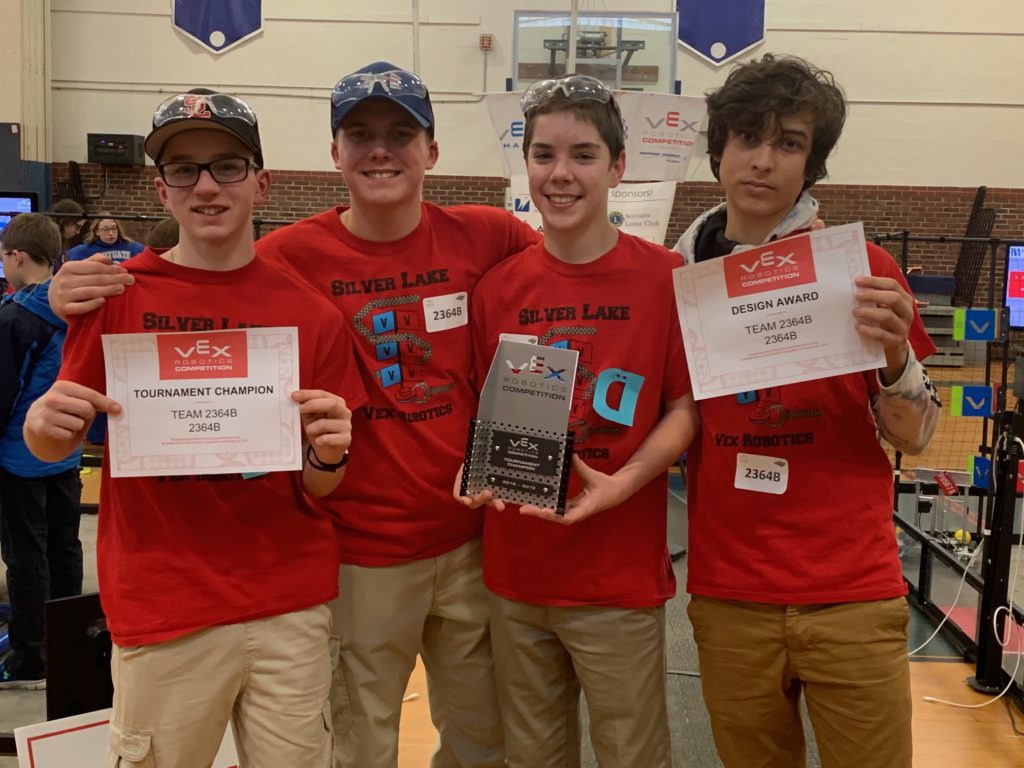 Team 2364B of the Silver Lake Middle School VEX Robotics after school club, won the qualifying tournament last Saturday, Feb. 2, in North Scituate, RI, for the New England VEX Qualifying competition. They will go on to compete in the New England Regional Championship Feb. 23 in Framingham. From left are JD Keegan, Max Colombo, Wes Hawley and Sami Areski, with their certificates and trophy. Not pictured are Gavin McKenna and Dylan Whittemore. (Photo by Julie Walker)

By Julie Walker
Special to The Express

Team B from Silver Lake, after a grueling day of matches, won the tournament!  This is the first time a team from Silver Lake has accomplished that feat.  In addition, they also won the design award.

The Silver Lake VEX Robotics Club has four teams of students who competed in the Turning Point qualifying competition.  Of the four, Team 2364B will advance to the New England Regional Championship Feb. 23, at the Walsh Middle School in Framingham.

The “Turning Point” competition began with nine ranking qualifying matches for each team.  Once the teams were ranked by how many points they scored, the top teams chose their alliance partner team to compete with in the elimination rounds.

Each match lasts only two minutes. The first 15 seconds is an autonomous portion of the game, where student-written computer programs are run to score as many points as possible. The alliance with the highest score during “autonomous” are granted the autonomous points.  Then there are 1 minute and 45 seconds of driver-controlled competition. This portion is both offensive and defensive with the ultimate goal of scoring the highest number of points in your alliance color. The alliance team with the highest points wins the match.

On Saturday, Silver Lake Team 2364B was ranked 4th and they were chosen by the 3rd ranked team from North Andover to be their alliance partner.

Students from Silver Lake designed their robot to flip the caps, turn the flags, place caps on the posts and park on the platforms.

This year, VEX introduced a new Robot platform, V5, with a smart brain and smart controller that required the use of a new programming language C++.

Congratulations, teams, for an outstanding performance!

If you want to call a turkey, just talk to Randy Sullivan.   He can give you a lot of choices that … END_OF_DOCUMENT_TOKEN_TO_BE_REPLACED