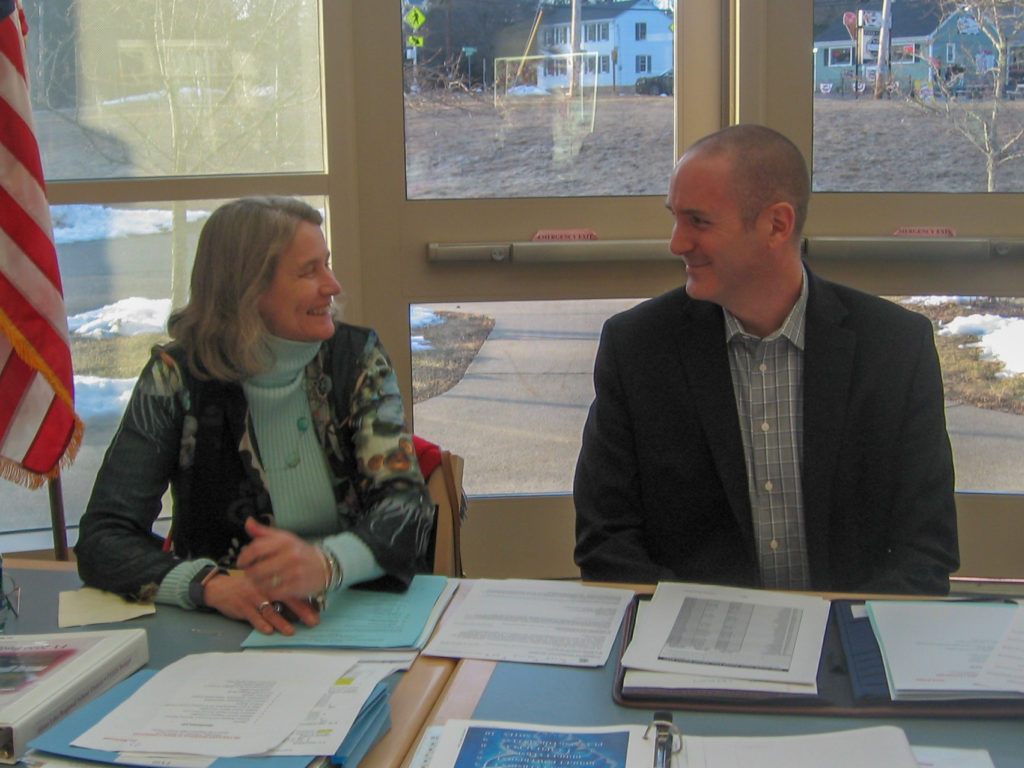 The Silver Lake Regional School Committee meeting Thursday, March 14, opened with Silver Lake student Bradley Sprunger giving a robotics presentation. Sprunger, who plans to study biomedical engineering in college, created a small prototype of an all-terrain wheelchair that would enable wheelchair users to better maneuver stairs and other obstacles. The committee lauded both Sprunger and his engineering teacher, Russell Shute, for a job well done. 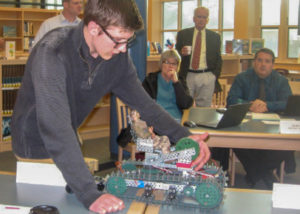 Silver Lake High School principal Michaela Gill, spoke on the possibility of incorporating a therapy dog into the school’s environment. Marshfield High School allowed members of Silver Lake’s staff to shadow their therapy dog, Nala, to better see the ways in which a therapy dog can enhance the student experience.

A therapy dog can be utilized in a variety of ways including scheduling visits with the dog prior to big exams in order to calm students’ nerves. Marshfield’s construction class even built Nala a dog house while the art class used her as a live model. In an effort to bring the program to Silver Lake, the school’s adjustment counselor Amanda Carr, has had her hypoallergenic dog Bodie registered as a therapy dog.

Gill spoke with pride about the accomplishments of Silver Lake students including twelve of the fall and winter sports teams being awarded the team sportsmanship award as voted by their opponents in the league.

On the arts front, several Silver Lake students were selected for the 2019 all-state music festival which included a performance at Boston’s Symphony Hall on March 2. Additionally, the theatre department was brought back into The Massachusetts Educational Theater Guild (METG). Despite the prestigious and competitive nature of the METG, four Silver Lake students won awards.

The month of March comes with a lot of excitement at Silver Lake Regional Middle School. Principal James Dupille described last week’s spirit week which culminated at March Madness, one of the biggest events of the school year. Activities at the event included a staff vs. student basketball game, a dance in the cafeteria, a photo booth and karaoke in the lobby as well as a gaming system setup in the auditorium.

In other news at the middle school, breakfast is now being offered to students in the cafeteria during homeroom. Students will have the option to select from various grab and go breakfast items.

The Committee was excited about this opportunity as early start times have been shown to have a detrimental impact on adolescents and the hope is that by providing a breakfast option, students will be able to get a jump start in the morning before beginning their studies. 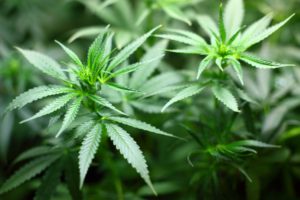 The potential effects that a recreational marijuana retail shop in Kingston could have on Silver Lake students was  discussed at the Sliver Lake Regional School Committee meeting Thursday, March 14, 2019. (Courtesy image)

The potential effects that a recreational marijuana retail shop in Kingston could have on Silver Lake students was also discussed among the committee.

Currently, the town of Kingston has approved recreational marijuana establishments in commercial zones that are 1,000 feet or more from schools or other areas where children congregate.

There are several warrant articles that will be voted on during Kingston’s town meeting including a proposed year-long moratorium on retail marijuana shops as well as one to reduce the buffer zone between schools, etc. and retail shops from 1,000 feet to 500 feet.

Vice chair of the school committee Eric Crone asked the committee to consider a motion to support the one-year moratorium on retail shops in Kingston as well as not to support the reduction in distance.

Crone was basing his request on research out of California that indicated that schools that have retail marijuana shops in their towns, have a higher usage amongst their students. Principal Gill also acknowledged having read similar research and said the same correlation was found between vape shops and usage.  The resolution proposed by Crone was passed unanimously by the committee.

Committee chair, Jason Fraser, agreed to draft a letter on behalf of the committee to be presented at the town hall meeting.

Another issue discussed at length was the warrant article to fund a school resource officer at Silver Lake Regional Middle School.

The discussion was a continuation of the one had at the Monday March 11 meeting between the school committee and the Halifax Finance Committee.

As of this past year, the school resource officer at the high school is a full-time position funded by the Kingston Police Department as the school is within the jurisdiction of the town of Kingston.

Currently, the resource officer at the high school does his best to make his way to the middle school whenever possible.

However, both Fraser and Superintendent Joy Blackwood stressed the importance of having an officer at both schools, citing a recommendation resulting from a safety audit of the middle school campus by experts in the field.

The regional nature of the school district complicates the question of how to fund a second resource officer. The proposed solution would be a Kingston officer funded as was previously done at the high school prior to this past year. Plympton and Halifax would share the expense as Kingston has been funding 100% of the high school officer despite a benefit to students from both Plympton and Halifax.

A representative from the Halifax Finance Committee present at Thursday’s meeting stressed that while they support the idea of the resource officer, they do not support the proposed mechanism to fund that officer.

The main point of contention is the funding coming from a separate warrant article rather than included in the proposed school budget.

School leadership acknowledged this concern and agreed that even if the position were funded for a year through a warrant article, they would work with the communities to find a potentially different way to fund it in the future.

Blackwood hopes to schedule a meeting between the school committee, police, finance committees, and selectmen in the three towns to further discuss.

If you want to call a turkey, just talk to Randy Sullivan.   He can give you a lot of choices that … END_OF_DOCUMENT_TOKEN_TO_BE_REPLACED