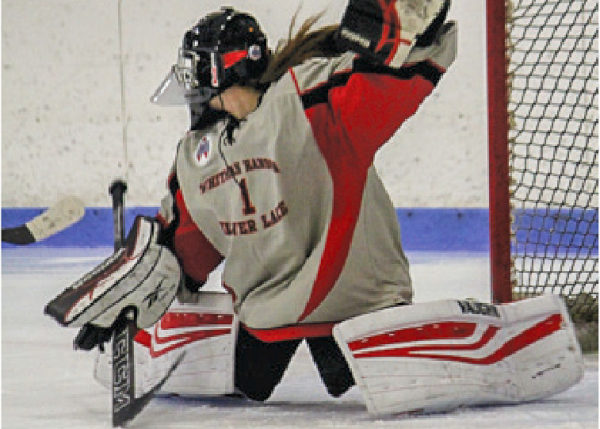 Sophomore goalie Kat Gilbert, of Halifax, has been a key playmaker this season. (Photo by Sue Moss)

Inconsistency. It was a thorn in the Whitman-Hanson/Silver Lake high school girls’ hockey team’s side all season.

“We’ll play two really good periods and have one really bad period and every time we had a really bad period, it hurt us,” said fourth-year WHSL head coach Kevin Marani, whose team finished the winter 4-13-2.

actor in its inability to string together a full three periods. Fifteen of its 19 skaters were either freshmen or sophomores. They dropped five games by two goals or less. Wins came against Stoughton (twice), Quincy/North Quincy and Shawsheen.

I said to the girls, ‘We’re so close. Once you start to win, it becomes a habit,’” Marani said. “We had a ton of one-goal games, two-goal games with an empty net.”

The Panthers did make strides from last season, doubling their win total, upping their points total from four to 10 and potting 62 goals as opposed to 31.

Back with WHSL  after playing club hockey last season, junior captain Alyssa Murphy (Kingston) was a force on offense, netting 27 goals and dishing out 15 assists. She was in on 67 percent of the team’s tallies.

“She’s such a good talent,” Marani said. “Her talent speaks for herself. She was very unselfish, all about the team. Everything she does is team first. “

Sophomore Emily McDonald (Hanson) was second on the team with 15 points (6 goals and 9 assists). Not only did she play on the same line as Murphy, but she’ll serve as a captain with her next season as well.

“She’s another great kid,” Marani said. “She’s a leader. She is  quiet girl that leads by example. She is probably the hardest working player on our team. Every practice she is there. She is exactly what we want from every single player. If we had 20 Emily’s we’d be very, very good.”

Surprisingly enough, Marani said the strength of the team was defense. To be strong on defense, you need a steady presence in net, and sophomore Kat Gilbert (Halifax) provided that, turning away 481 shots.

“Kat is becoming a real goalie,” Marani said. “She is one of the better goalies in the league and that is a big part because she was committed. A lot of her issues were concentration.”

Freshmen Lilly Ulvila (Kington) and Abby Powers (Kingston) provided the Panthers with a look into the future. The two combined for 11 goals and 10 assists.

Marani said he has the same expectations heading into the offseason as he did coming into this year.

“We should make the state tournament next year,” said the coach. “If we don’t, it’s going to be a disappointment.”

If you want to call a turkey, just talk to Randy Sullivan.   He can give you a lot of choices that … END_OF_DOCUMENT_TOKEN_TO_BE_REPLACED