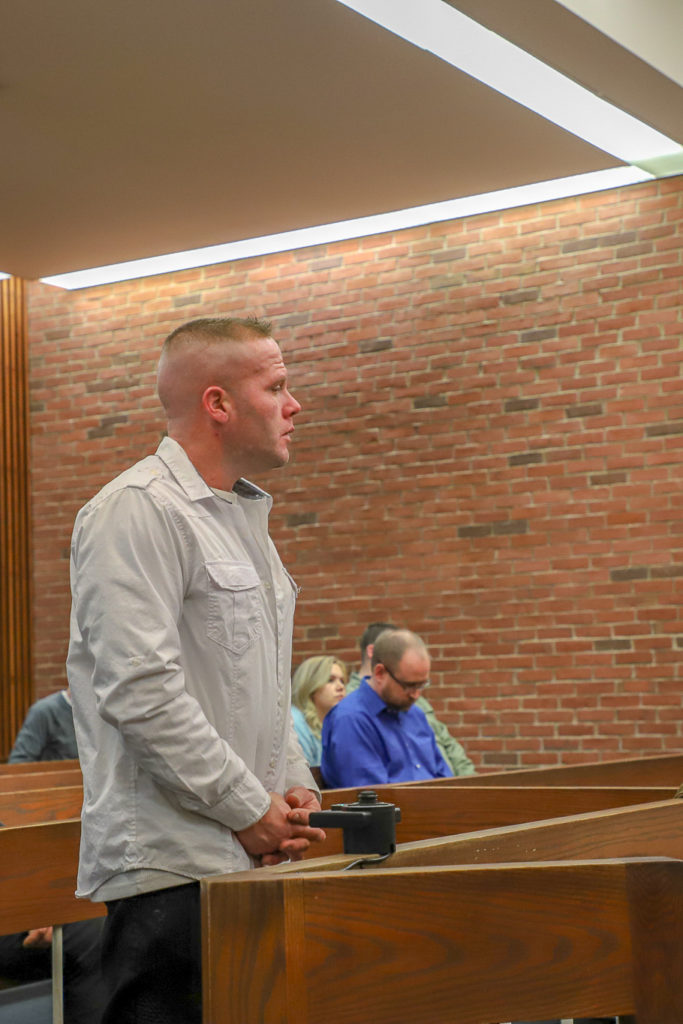 Matthew Will stands before the court in Wareham at a previous hearing. (Photo by Abram Neal)

PLYMOUTH — A pretrial conference for roofer Matthew Will, 37, of Halifax, owner of Five Star Discount Roofing, scheduled Friday, Dec. 21 for two of five known open larceny-related cases in Plymouth County, has been delayed.

Will last appeared in Wareham District Court Dec. 7 on three other cases. A new alleged victim has come forward first to the Express and later to local authorities with a similar story to those of other alleged victims.

Will’s Plymouth-based attorney, Jack Atwood, delayed the two hearings because he was busy with another case in Quincy, according to court records. The proceedings were canceled at the last minute, on Thursday, Dec. 20, although Will’s cases still appeared on the court’s daily logs as late as Friday morning.

There were 23 area households in three communities claiming they have been victimized to date, who have lost a combined $153,197.34 in monies allegedly given for work not done, with individual losses ranging from $695 to $15,569. Most of these victims are over age 55, and many are elderly, according to police reports. The alleged victim who lost the most money is 78 years old.

These totals do not include the newest alleged victim, who is from Wareham.

Will had done work for him in 2017, before moving to Wareham, he said, with no issue. He appeared to have a good reputation at the time, the semi-retired man stated in an email and a later phone interview with the Express.

Based on his previous positive experience with Will, when his daughter and son-in-law had major roof and chimney issues at their East Bridgewater home, he said he chose to help them out financially and reached out to the roofer, calling it a big mistake not to recheck his licenses.

Checking Will’s licenses, though, may not have shown anything as his CSSL-Roofing and HIC licenses are currently active, although he does have several pending arbitrations before the Office of Consumer Affairs and Business Regulation, according to state records.

The Wareham alleged victim said he paid $14,000 for a roof that never vented properly, and waste shingles and trash are still on-site, weeks after work began on the home. He also said he paid $6,047 for chimney work that was never started, and siding was stripped on one section of the house, which is still bare. He estimates that there is $7,000 of outstanding work to be done.

The Wareham man reached out to local authorities, he said in a Wednesday, Dec. 19, email, who alerted Will to another complaint against him.

This prompted a phone conversation between the man and Will, who promised to come Dec. 27 to finish everything except the chimney.

“I don’t hold much hope but if by chance I can get any work completed I would like to try first before I move ahead [to press charges],” he wrote.

Will could not be reached by email or phone for comment as of press time.

If you want to call a turkey, just talk to Randy Sullivan.   He can give you a lot of choices that … END_OF_DOCUMENT_TOKEN_TO_BE_REPLACED