You are here: Home / More News Left / Child, 4, gives to HPD for others 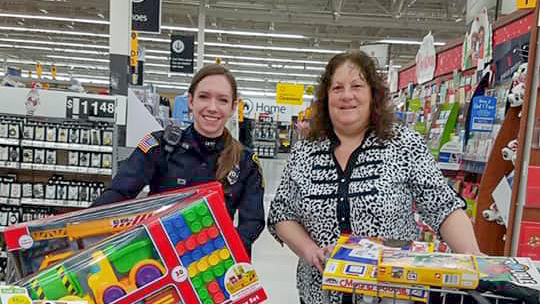 Officer Michelle McIntyre and Halifax Police Dept. Administrative Assistant Antoinette Tripolone Ross fill their baskets at Halifax Walmart shopping for toys for children in need. All these were made possible by the donation of a 4-year old boy in Halifax. (Photo courtesy Halifax Police Department)

HALIFAX — In early December, says Halifax Police Administrative Assistant Antoinette Tripolone Ross, a four-year-old boy walked into the Halifax Police Station with his grandfather. The young boy wanted to make a generous donation– $100– to children less fortunate than him in the area, said Tripolone Ross, who was touched by the gesture.

“I had goosebumps. What a way to raise a child,” she exclaimed.

She accepted the donation on behalf of the department, which went to their gift fund. Under the direction of Chief Joao Chaves, the department decided to match the funds given by the child, bringing the total donation to $200.

Tripolone Ross and Officer Michelle McIntyre, the department’s School Safety Officer, contacted John Mather, the manager of Halifax’s Walmart Supercenter, asking if there was any possibility an employee discount might be used to extend the $200 and the number of toys that could be purchased.

The two were delighted to find out that Mather would instead match the money on behalf of Walmart, bringing the total donation to $400.

“It was uplifting. I was inspired,” said Mather. “Let’s keep this good thing going,” he said he thought upon hearing of the boy’s generosity.

Tripolone Ross and McIntyre spent just over $400 on toys for children in need. They were picked up by the Salvation Army for distribution, according to the department.

“We need more of this kind of stuff in the world,” said Mather.

The boy and his grandfather toured the police station, met Chief Chaves and posed for a photo in a police cruiser.

“Look at what he [the boy] started,” said Tripolone Ross. “I can’t wait for next year,” she added, excitedly.

The Plympton Board of Selectmen met virtually on the evening of Monday, Jan. 23. Chair Christine … END_OF_DOCUMENT_TOKEN_TO_BE_REPLACED