You are here: Home / More News Right / New Fire Chief Silva sworn, says Dept. is ‘ready for the next level’ 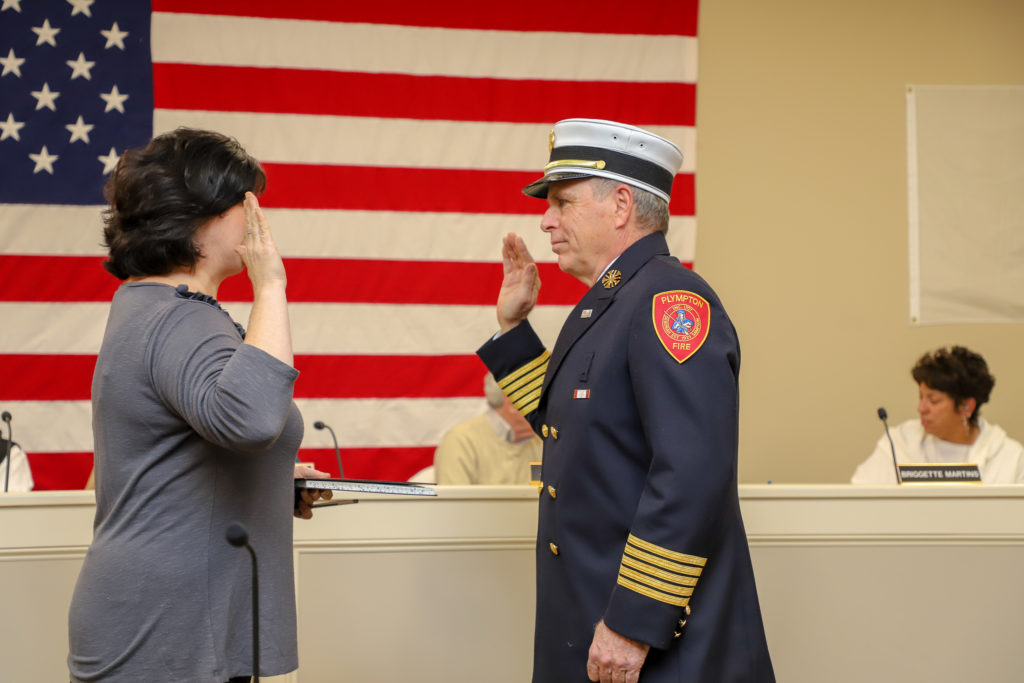 PLYMPTON — Stephen G. Silva, of Popes Farm, took over as the Plympton fire chief Monday, Nov. 19. The following day, he was personally cleaning out a storage room at the fire station— where he envisions a bunk room to replace the trailer out front— and was already easily joking around with the men and women who make up the department.

“Firefighting is a calling,” he said. “I’ve been chasing firetrucks since I was riding a bicycle.”

The 23-year Plympton resident said he is proud to take over the department and has a wide range of experience, including more than 40-years in firefighting and emergency medical services, in both the public and private sector. Most recently, he was a lieutenant with the Middleborough Fire Department, where he frequently served as shift commander.

But before Silva talked much about himself, he wanted to point out the dedication of the firefighters of the Plympton Fire Department.

The department went through a difficult period this year, he conceded— including an outside investigation, by Municipal Resources, Inc. The investigative report went so far as to describe “a department in crisis” when it was written in February. In March and May the department lost their chief and acting-chief, respectively.

Yet Silva said the department was not in crisis, it was a department “searching for an identity.”

The firefighters have been functioning quite well in the absence of a chief and in the hands of senior leadership, he pointed out, but now the department is ready for the “next level … and when we get there, we’ll go to the next level again,” he said. “We do have dedicated people.”

Silva is an EMT/paramedic, rescue specialist and special operations operator for the Massachusetts Department of Fire Services. In addition, he teaches rescue techniques and is an instructor at Massasoit Community College.

In the late 1970s and early 1980s, he worked as an EMT, first getting excited about working in the field while a student at Syracuse University in New York. He eventually returned to Massachusetts where he has held a series of jobs in urban, suburban and rural settings for both cities and towns and in the corporate sector.

He has done everything from running his own ambulance company in Brockton, Exodus Medical Transportation, to establishing the first fire-based Advanced Life Support (ALS) EMS system on the South Shore, to work as a flight paramedic.

At his interview before the selectmen, he came recommended by many area fire chiefs, including Whitman (who is the president of the Fire Chiefs Association of Massachusetts), Duxbury, the current and retired chief of Middleborough, the retired chief of Kingston and the deputy chief of Hanson, among other fire officials.

Silva spoke of some of the issues concerning him in town. One topic he came back to in several different ways was adapting: learning to extricate accident victims differently as cars change, to fight fires differently as development brings more houses to the edges of forests and the opioid epidemic— which he says is truly an epidemic.

Silva said that cars have changed over time, and that rescuers have had to adapt to changes in vehicles in order to rescue accident victims. He added that when he worked in Middleborough, he would respond to horrific crashes on I-495, and that cars are made very differently than they used to be. “It’s become more and more technical,” he said.

He also said that while Plympton is not California— referring to the wildfires occurring there now— the town needs to be careful how it chooses to develop. He said that brush fires can and do happen, and that there have never been so many houses close to the edge of forests. This has led to changes in the ways that fires are prevented and fought, he added.

Silva spoke also of the opioid crisis, which he labeled as endemic of something wrong with society, although he doesn’t know exactly what it is. Although he is not certain of the number of calls related to opioids in Plympton yet, he spoke passionately about the issue county and country-wide.

“It’s a sign of a deeper problem,” said Silva.

Despite the challenges, Silva is keeping his eye on the future. “We’re coming out of the background,” he said of the PFD.

“I’ve been overwhelmed by the ideas, the sense of community and energy here. Firefighters are cut from a different cloth … they’re different. Different in a good way,” Silva added.

If you want to call a turkey, just talk to Randy Sullivan.   He can give you a lot of choices that … END_OF_DOCUMENT_TOKEN_TO_BE_REPLACED