PLYMPTON–Monday, Jan. 11, Plympton Selectmen met and appointed Steven Winslow as Deputy Fire Chief. Also discussed were a variety of ongoing issues, most of which were status updates. The meeting took place in less than an hour. 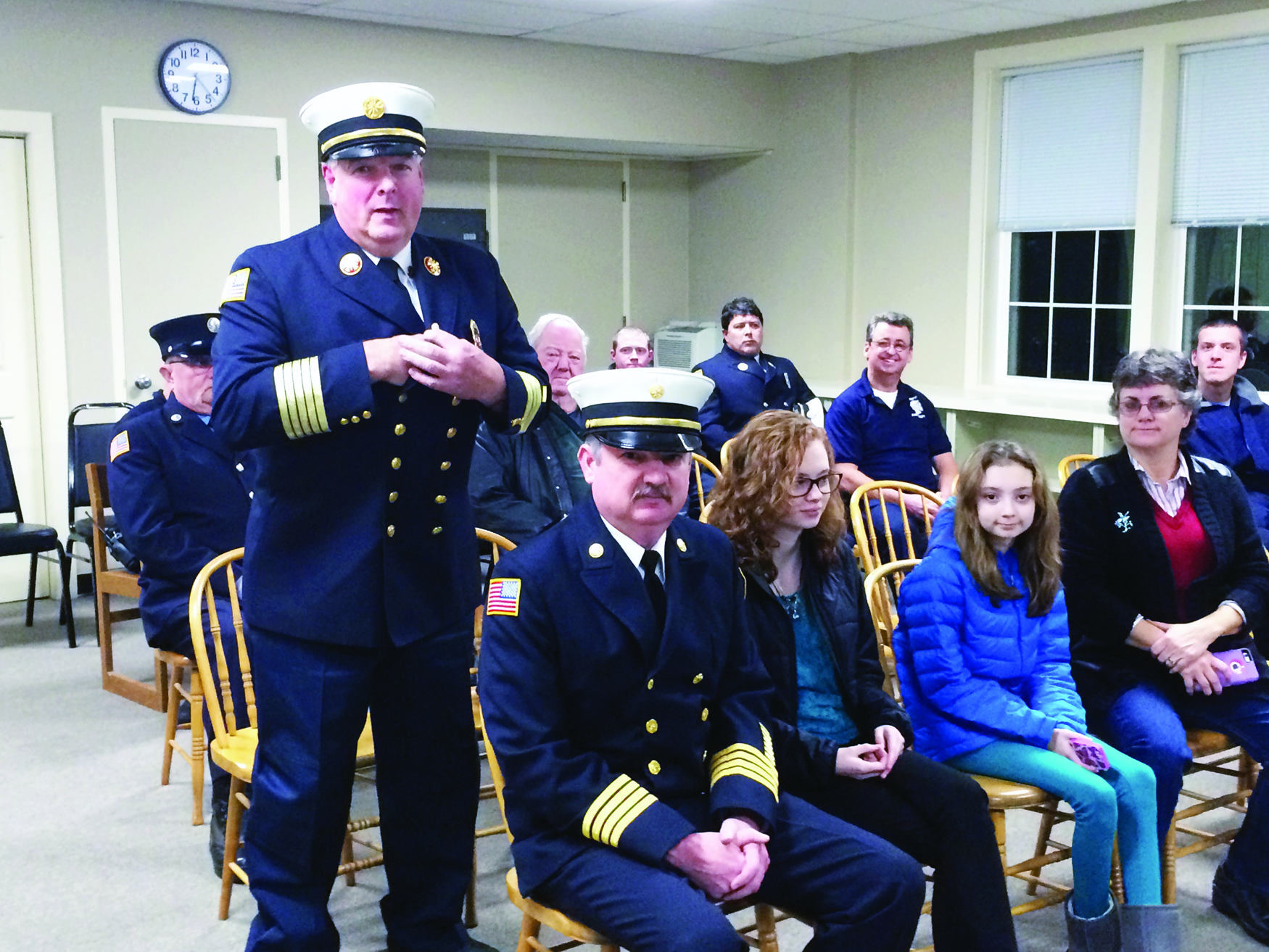 Plympton Fire Chief Warren Borsari stands and addresses the Board of Selectmen while a full crowd sits behind him and Steven Winslow, about to be appointed Deputy Fire Chief sits in the front row with his daughters and wife. Photo by Abram Neal.

At 6:30 p.m., the room quickly filled with family, friends and fellow firefighters wearing their formal dress uniforms to support Steven Winslow’s appointment to the position of Deputy Chief of the Plympton Fire Department.

Accompanied by his wife and children, Winslow proudly sat in the front row.

Fire Chief Warren Borsari stated that Winslow was “the perfect man for the job,” explaining that in Borsari’s absence Winslow will take full responsibilities as Chief. He had many kind words to say regarding Winslow.

After a brief pause, the 38-year veteran of the force was sworn in by Town Clerk Tara Shaw and Winslow’s wife pinned on his new badge.

The full room erupted in applause as Winslow kissed his wife.

• The Town Personnel and Policy Handbook is nearly complete, with all of the policies that the Selectmen wish to address at the moment completed. They rejected adding a “Computer Use Policy” at this time. Although still considered “a living document”, according to the Board, the introduction simply needs to be finished.

• The Finance Committee is recommending a level-funded budget, and Town Coordinator Dale Pleau is currently reviewing FY’17 budget details, noting that it is difficult to predict utility costs until the winter is over and that the legal counsel budget is often up in the air, as it is difficult to know how often counsel will be needed.

• Errors were reported in the Area 58 Community Access Media broadcast schedule last week, according to a citizen complaint. Selectmen said this was due to a death in the family of an employee at the non-profit tri-town cable studios. The Board does not believe this will be an ongoing issue.

• Selectmen Chairman Mark Russo gave a lengthy update on an ongoing issue involving the Winetuxet Children’s Place preschool in Halifax and a Plympton dog living next to the facility.