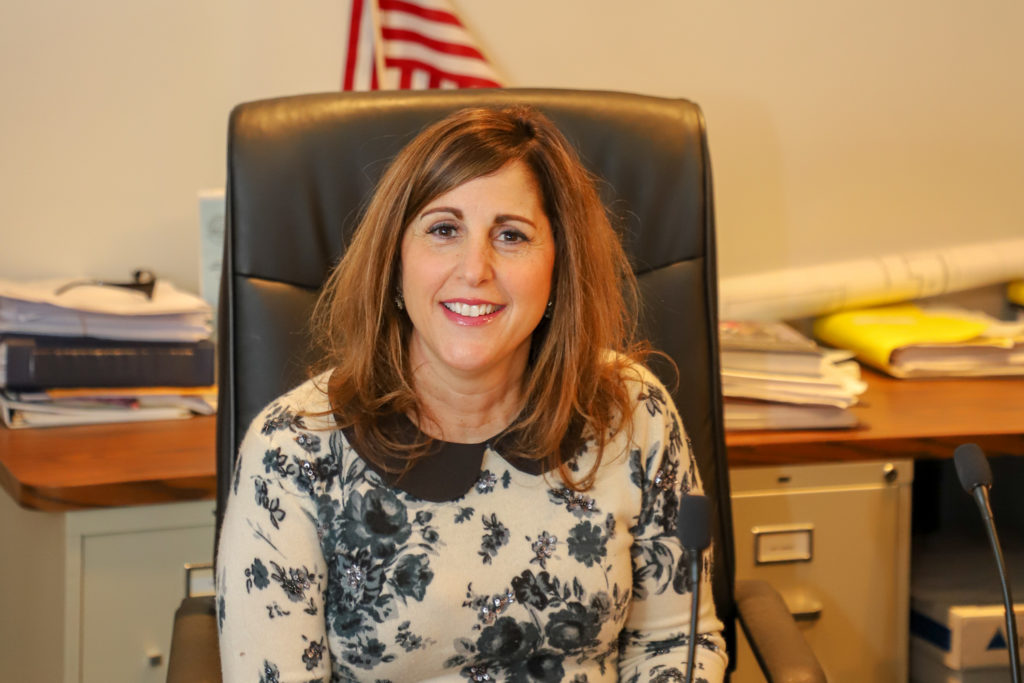 HALIFAX —While schools and afterschool activities were canceled due to inclement weather, the Halifax Board of Selectmen met Tuesday, Feb. 12, during a snowstorm to discuss their lengthy agenda.

Selectman Chairman Kim Roy spoke early in the meeting, sharing her thoughts on recent social media posts that have attacked Halifax Town Hall employees as well as board and committee members, that, she pointed out, are made up of volunteers.

Doing her best impression of President Richard Nixon, she joked, “I am not a crook!” All joking aside, Roy appeared hurt by the recent vitriol on Halifax community Facebook groups regarding attacks on the integrity of Halifax officials and workers.

Facebook posts for the last several weeks have blamed the board for discussions on ways to reduce litter caused from nips, which are small, inexpensive bottles of liquor generally under 50 milliliters that police say are often associated with drinking and driving.

The concepts discussed have included the idea of banning them in conjunction with other towns (the City of Chelsea recently passed a ban) or putting deposits on them to encourage recycling. Roy pointed out that this began with the town’s Beautification Committee, and the board was simply following up on their suggestions by discussing the issue.

The board received correspondence from a trade group representing alcohol retailers and local retailers concerned about these proposed measures, any of which would need to go to Town Meeting for the voter’s approval, according to Town Administrator Charlie Seelig.

But one Facebook user posted to the Halifax MA Community Page, “Here we go[,] the dictatorship of Halifax want[s] to ban nips! No public input[,] just Charlie[–] we can grow pot here in Halifax but we can’t have nips!”

The online responses have been emotional on both sides of the issue, with users offering up posts that are demonstratively not truthful.

“Think before you type,” said Roy.

Roy mentioned that the Beautification Committee also proposed a now-controversial Town Meeting article would ban single-use plastic bags by Halifax retailers, not the Selectmen. It has caused quite a stir on social media as well.

Seelig took to Facebook to defend town employees, board and committee members at several points over the last few weeks, including a lengthy post, reprinted in part, from Jan. 30, in response to a Facebook user who said, “Been telling you people for years [there is corruption] on the Hill!!! The Town Hall is so corrupt!”

Seelig said, “A belief such as this causes any action taken by the Town and, in particular, by the officials and employees at Town Hall, to be viewed through a lens of who was paid off for this to happen and that any action taken cannot be seen as being taken in the best interests of the Town and the people who live here.”

He continued, “I agree that there are ‘bad actors’ in municipal government. That’s also true in the regional, state and federal governments, private businesses and nonprofit organizations. But using a broad brush to paint everyone in a certain group on the basis of the actions of a few is unfair. It’s ‘sentence first, verdict afterwards.’ It’s accusations without evidence … It’s a common meme. Everyone who works for the government or, in this case, those who work at the Halifax Town Hall, are part of some great conspiracy; all of us are “on the take.” It simplifies the frustrations of many and it becomes the explanation for any action that the Town takes. And it leaves those who do work at Town Hall trying to prove a negative: that we are not corrupt.”

Roy, at the meeting passionately said, “Oh Mama Mia! We’re talking about ways to keep people from littering … and I found it interesting that more people were upset about us having this discussion of trying to figure out solutions rather than people drinking and driving and littering at the same time.”

Article one of the Feb. 25 Special Town Meeting warrant, according to Seelig, asks voters to appropriate $1,056,056.26 for the fire suppression system project at the Halifax Elementary School, which is in addition to the $977,000 voters already approved at the May 2017 Annual Town Meeting.

The total budget for the project is now $2,033,056.26, therefore an additional $1,056,056.26 is needed to fund the project. The current system is in disrepair and needs to be replaced, he said, and it will not be getting cheaper if the town waits to replace it.

The board was frustrated but resigned to the additional spending necessary for the safety of the schoolchildren and the integrity of the building.

Further information is available at http://halifax.ma.us/Pages/HalifaxMA_WebDocs/firesuppression

A concerned parent filed a complaint with the board regarding cars passing stopped school buses with red lights flashing, which, as drivers should realize, is illegal, said Seelig.

According to Roy, Chief of Police Joao Chaves, a “hands-on” chief, decided to investigate on his own, unbeknownst to area bus drivers.

Chaves followed a Halifax school bus in his unmarked cruiser recently, and the attentive bus driver noticed that their bus was being followed by a suspicious vehicle – Chaves.

The driver radioed their dispatcher, who contacted police.

When Chaves realized what was going on and that he had concerned the driver, Roy said he turned on his blue lights and pulled the bus over, to let the driver know that the suspicious vehicle was actually a police cruiser, and that he was in fact the Halifax police chief.

The driver was understandably nervous about the situation, said Roy, but the board commended both Chaves and the driver for their conscientious work.

Fortunately, no cars passed the bus in question while it was stopped loading and unloading children. The board did discuss how camera technology might be used to capture license plate numbers of such dangerous driving behavior and scofflaws all over Halifax should know that they are being watched, even by the town’s top law enforcement officer.

If you want to call a turkey, just talk to Randy Sullivan.   He can give you a lot of choices that … END_OF_DOCUMENT_TOKEN_TO_BE_REPLACED