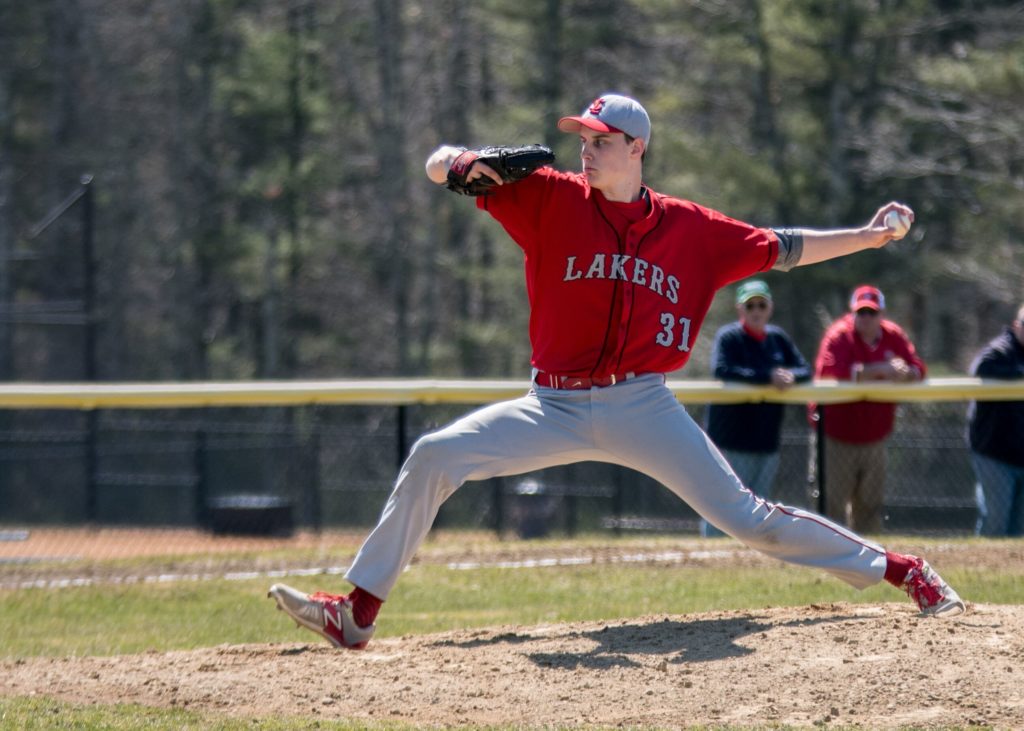 Nolan Hughes leans into the pitch. (Photo by Aaron Duke)

The personnel is largely different, but the goals remain the same for the Silver Lake High School varsity baseball team.

The Lakers lost 12 seniors to graduation following last spring when the team went 13-7 and made yet another MIAA Division 1 South tournament appearance. Now, it will be up to many younger players and varsity newcomers to lead the team this season.

The Lakers will be propelled by their starting rotation that does feature three returning varsity players: Nolan Hughes, Alex Heffernan and Michael Quigley. Each of them pitched well for the Lakers last season. Quigley threw a no-hitter in his first career varsity start last season, Hughes was a Patriot League All-Star and Heffernan is a four-year varsity player.

The challenges for the Lakers will include finding pitching depth and filling out their starting nine as they hope to contend for another Patriot League title; with Duxbury, Hanover and Plymouth South returning strong teams, it will be a challenge, as usual.

Cole Whidden and Jake Holmes should log some innings for the Lakers and the same could be said for Harrison Milbert, a freshman and first-year varsity player.

Hughes and Heffernan will both likely see time at first base when they are not pitching while Bobby Ohlson and Matt Bettle provide the outfield with some varsity experience. Will Cauchon’s bat will return to the lineup, seeing time at third base and as a designated hitter and Connor Burgess takes over behind the plate as the team’s starting catcher.

As of the start of this week, the Lakers were 0-2 on the season. They dropped their opening game against Xaverian 11-1 on Thursday, Apr. 4 and two days later, Barnstable beat them 5-0.

The Lakers next game is scheduled for Wednesday,

If you want to call a turkey, just talk to Randy Sullivan.   He can give you a lot of choices that … END_OF_DOCUMENT_TOKEN_TO_BE_REPLACED