You are here: Home / News / Fish stocking on the Winnetuxet 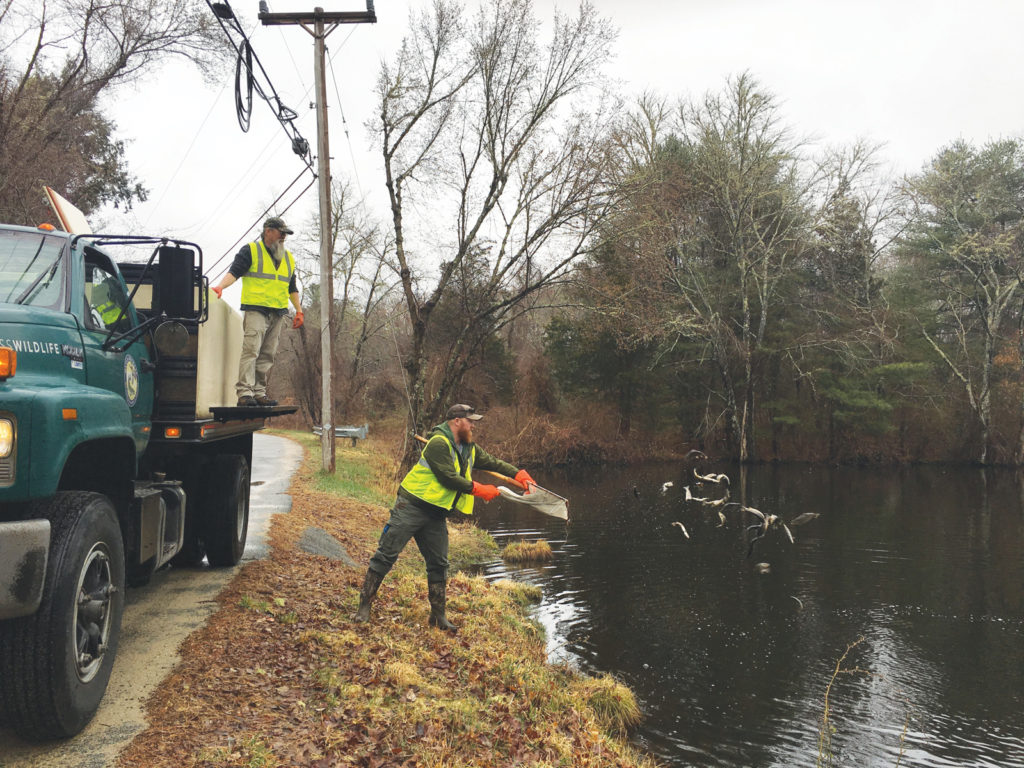 Plympton’s Winnetuxet River and Taylor Pond were stocked with about 600 brown trout on Monday.  (Photo by Michelle Smith)

Plympton’s Winnetuxet River and Taylor Pond were stocked with about 600 brown trout on Monday.  This photo by Michelle Smith caught the fishery guys in the act.

Many rivers and ponds are in the process of being stocked with trout by the Massachusetts Division of Fisheries and Wildlife, as they get ready for the spring fishing season.

Biologists at Fisheries and Wildlife told the Express that about 600 Brown Trout were released into Taylor Pond on Monday.  Taylor Pond is considered a “put and take” stocking site, and the trout are not expected to winter over and naturalize, according to Fisheries biologists say.

They don’t stock Monponsett Ponds because that water is too warm, according to the biologist.  Trout are cold water fish and a water temperature of 52 degrees is ideal.

About 3,000 trout, a mix of Brook Trout, Brown Trout, and Rainbow Trout were released into the Indian Head River, which runs between Hanover and Hanson.

These trout, measuring between 6 inches and 8 inches, were raised in the Sandwich hatchery, and were part of close to a half million fish stocked throughout Massachusetts this spring.   Coupled with the more than 65,000 fish stocked last fall, the 2019 fishing season should be excellent, according to the fisheries personnel.

If you want to call a turkey, just talk to Randy Sullivan.   He can give you a lot of choices that … END_OF_DOCUMENT_TOKEN_TO_BE_REPLACED