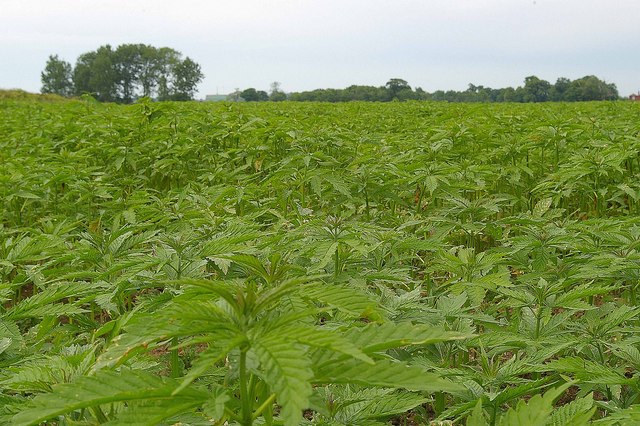 A field of hemp.

The Town of Plympton has been notified by the Commonwealth that the town’s first Industrial Hemp Grower License was issued by the Massachusetts Department of Agricultural Resources to Scott Sauchuk.

When contacted this week Sauchuk told the Express that he isn’t going to plant the crop; that he  applied for the license over the winter, when it looked like a good idea.  Further research helped him decide to go with other plans.

Hemp culture is a crop that will likely be seen again as it can now be grown without the stigma of being a “cousin” to marijuana.

The Act to Ensure Safe Access to Marijuana, legislation passed July 28, 2017, created a distinction between hemp and marijuana, recognizing hemp as an agricultural commodity, and removed it from the controlled substance list, allowing hemp to be grown commercially throughout the United States.

The Massachusetts Department of Agricultural Resources (MDAR) was given the authority to oversee the growth and production of hemp for commercial and research purposes within the Commonwealth, and the planting, growing, harvesting, processing, and retail sale of hemp and its products require licensing by MDAR.

Under federal law, the 2018 Farm Bill allowed the United States Department of Agriculture to develop regulations and guidelines relative to the cultivation of hemp and set the stage for major changes to the Industrial Hemp industry in the United States.  These include, but are not limited to the following:

• Hemp has been removed from the Controlled Substances Act and is now considered an agricultural commodity, rather than a drug, though it is still subject to  state and federal oversight.

• Hemp is now eligible for federal crop insurance and hemp farmers may now participate in USDA programs for certification and competitive grants.

Hemp and marijuana are different varieties of the same plant species and cannot be distinguished simply by looking at them.  Due to the differences in the end use of the product, they are generally cultivated differently.  They are both cannabis plants and both produce cannabinoids.  The marijuana plant contains high levels of the psychoactive compound THC – 5% to 25%.  The varieties used for hemp, however, have been selectively bred to contain no more than .3% of THC.

The MDAR will test the crop before harvest to ensure that the crop contains less than .3% THC.

Under Massachusetts General Laws, Chapter 40A, commercial agricultural use is protected from unreasonable regulations or special permit requirements under local municipal zoning ordinances or bylaws.  While marijuana is expressly excluded from this protection, hemp is exempt from the definition of marijuana and is therefore eligible for the same protection as other forms of commercial agriculture.

Hemp, according to the Commonwealth of Massachusetts web site regarding the Commercial Industrial Hemp Program, is an extremely versatile plant with many uses.  It can be cultivated as a fiber crop, seed crop, or for production of cannabinoids found in the flowers.  Hemp products manufactured from the fibrous stalks and seeds include rope, clothes, food, paper, textiles, plastics, insulation, oil, and biofuel.

For more information regarding the regulations around the cultivating and processing of hemp, go to https://www.mass.gov/files/documents/20182018/04/30/Hemp%20Policy.pdf