You are here: Home / Breaking News / One of six charges dropped against health agent Tinkham 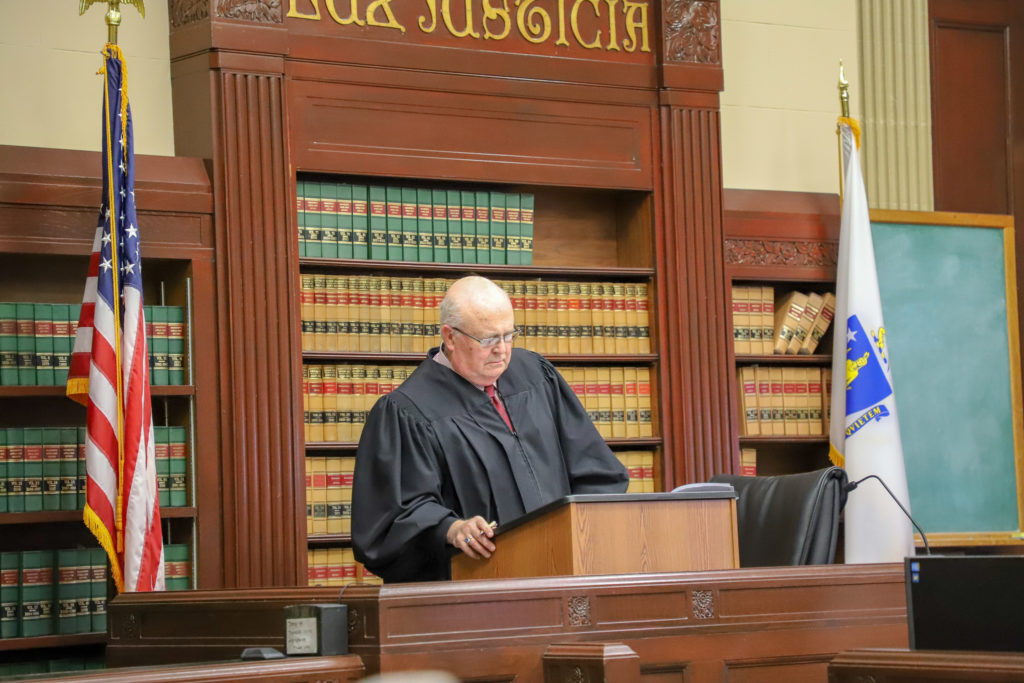 Robert Tinkham, of Carver, the Plympton Health Inspector, asked a judge to drop several charges against him in a civil suit alleging he defrauded the Carver, Marion and Wareham Regional Refuse Disposal District, where he was a member of the committee overseeing the district (and at times chairman of that committee) in his capacity as the Carver Health Agent. He, along with two alleged co-conspirators, Ray Pickles, once the district’s Executive Director, and his wife Diane Bondi-Pickles, a real estate agent, are accused of stealing in excess of $838,458.22 from the district.

At a hearing Jan. 14, Superior Court Judge Robert Cosgrove took the matter under advisement. On Feb. 7, Cosgrove partially allowed and partially denied the motion to dismiss the charges, and while he dropped one of the charges, six charges still stand.

In an 18-page written ruling, Cosgrove outlined his rationale charge-by-charge. The complaint against the three defendants originally contained nine charges. Two of the charges were plead in the original complaint only to “reach-and-apply” defendants, who have since been dismissed from the action, and therefore those two charges are no longer applicable.

Of the seven remaining charges, Cosgrove only dropped one, count six, for violations of M.G.L. c. 30B, or the Uniform Procurement Act, a 1990 law that codifies uniform public contracting procedures to promote competition and fairness, according to the state. (Cosgrove dismissed this charge against Bondi-Pickles as well.)

Tinkham argued that count six should be dismissed for three reasons: failure to allege any contract subject to the laws, failure to allege that he was a “procurement officer” as defined by the law and that there is no private right to sue under the act.

Cosgrove agreed with the final point, saying, “Consequently, Plaintiff’s claims against … Tinkham pursuant to … the Uniform Procurement Act, must be dismissed. Because there is no private cause of action under G.L. c. 30B, the court need not reach the other arguments presented by the defendants pursuant to that claim.”

The lawsuit now charges Tinkham with six causes of action: conversion and civil theft; breach of fiduciary duty; fraud; money had and received; civil conspiracy; and violations of M.G.L. c. 93A, the consumer protection law.

The lawsuit alleges Tinkham received monetary payments from the district between 1995 and 2018, but other waste district committee members did not receive compensation for their services. He did not have a contract or employment agreement with the district, and no taxes were withheld on the payments, according to the original lawsuit, which was later amended by the district.

Court records say he billed the district for landfill inspections while working for the Town of Carver. Carver’s job description for the health agent includes inspecting the Carver landfill, according to public records. In 2007, Carver officials reaffirmed this aspect of the job description.

But, the Carver landfill, leased by the district, is inspected by a professional engineer. Tinkham is not an engineer, according to his resumé, and he kept no records of his inspections for Carver, if they indeed occurred, the lawsuit alleges. The total amount paid to him for inspections by the district was $88,990.

In the lawsuit, the district points to 13 representative examples from 2004 and 2005 alone of Tinkham collecting payments from the district while being paid a salary from the Town of Carver.

Tinkham also stands accused of providing no goods or services in connection with money he was paid for the district’s “Grant/Recycling” services, between 2012 and 2018, totaling $88,100. He allegedly submitted false documentation for payment for that work.

Tinkham also stands accused of receiving payments not supported by any documentation at all. “In total, there are 82 payments totaling $86,703.82 for which payment was made but the District has no invoice or proof of any services rendered,” say court records.

The alleged fraud was discovered when Pickles, in 2017, without the authorization of the committee, sought payment of assessments from the district towns for the first time since 2015.

When Carver and Wareham refused to pay, claiming a lack of documentation, Pickles used district counsel, without authorization, to sue for breach of contract in Wareham District Court.

That suit was voluntarily dismissed. Pickles was terminated Jan. 29, 2018.

The district was created as a regional refuse disposal district in 1973 by a special act of the General Court.

It is an independent body-politic, based in Marion, funded by user-fees, assessments to the member towns and agreements with third-parties.

According to files obtained by the Express, the state Office of the Inspector General is investigating the alleged misconduct as well, in addition to the lawsuit against Tinkham, Pickles and Bondi-Pickles.

The district is seeking triple-damages, interest, costs and attorneys’ fees.

The Plympton Board of Selectmen met virtually on the evening of Monday, Jan. 23. Chair Christine … END_OF_DOCUMENT_TOKEN_TO_BE_REPLACED