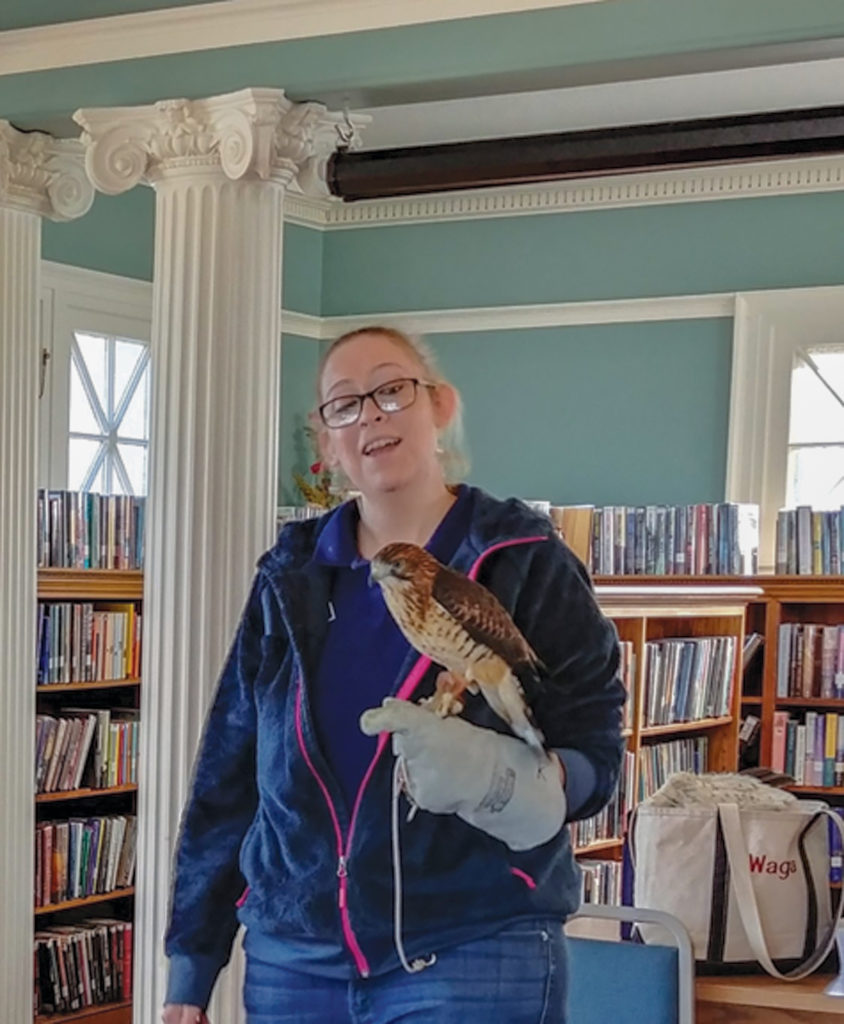 Shannon Murphy, from the Blue Hills Trailside Museum, kept her audience in rapt attention as she told the tales of various tails at the Plympton Public Library on Saturday.  Shannon brought the program Nature Tales: Habitatsto her listeners, young and older.

Shannon is pictured with the Museum’s Broad-winged Hawk.  Miranda Bloom of the Trailside Museum in Milton explained that they don’t name their resident wildlife to remind people that these are wild animals, and not pets.  “This is particularly applicable to the Broad-winged’s story, because that is part of how he came to us,” she told The Express.

“All of the animals that reside at the Blue Hills Trailside Museum are not able to be released into the wild for one reason or another, whether it be because of injury or imprinting.  In this hawk’s case it was due to imprinting.  He was found by a family as a baby and kept as a pet until they learned it is illegal to keep wild animals in captivity.  The family tried to release the hawk back into the wild but it didn’t know how to catch its own food by that point. “

“He kept returning to their deck,” Bloom continued, “allowing other birds to peck his head, injuring him, while he waited to be fed.  After being rehabilitated he was brought to the Museum and now helps with our education programs.”

The Blue Hills Trailside Museum is operated in partnership with the Massachusetts Department of Conservation and Recreation.  It is the interpretive center for the state-owned Blue Hills Reservation and features a natural history museum and outdoor exhibits of native wildlife.  The animals on display – including Snowy Owls and a River Otter – have been rescued and would not survive in the wild.

It is located at 1904 Canton Ave., Milton and is open Thursday through Sunday, and Monday holidays, from 10 a.m. to 4:30 p.m.  Outdoor exhibits are open daily from dawn to dusk.

To learn more about the Blue Hills Trailside Museum and its programs, go to https://www.massaudubon.org/get-outdoors/wildlife-sanctuaries/blue-hills-trailside-museum .

If you want to call a turkey, just talk to Randy Sullivan.   He can give you a lot of choices that … END_OF_DOCUMENT_TOKEN_TO_BE_REPLACED