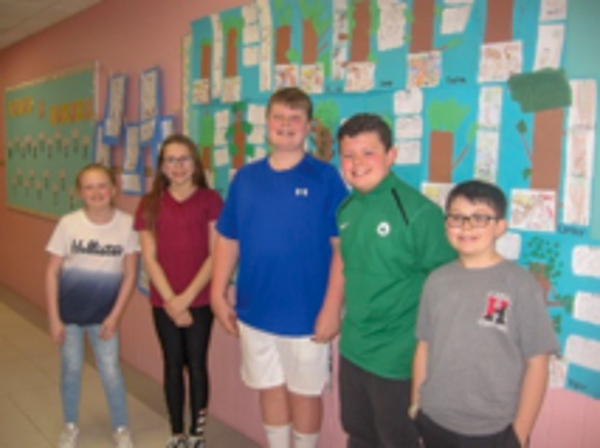 Back in 2016, a project known as Design Squad Global was launched by WGBH and funded through a grant from the National Science Foundation. The project was based on the PBS Kids show Design Squad that aired originally from 2007 to 2011.

As described on pbskids.org, “Design Squad Global empowers middle school kids to solve real-world problems and understand the impact of engineering in a global context.” Anyone interested in starting their own club can sign up via the website (https://pbskids.org/designsquad/) and be matched with an international partner club. A full club curriculum guide for either 6 or 12 weeks is available on the website and includes multiple hands-on STEM related projects to be completed by both partner clubs with results being shared with one another via pictures and video chats.

Recently, students at Halifax Elementary School had the opportunity to participate in a Design Squad Global club at their school led by teachers Lisa Whitney and Jen Reidy. The Halifax students were partnered with a school in Kenya.

Nicki Sirianni, the Outreach and Marketing Manager for Design Squad Global, explained, “Our goal is to get into as many pockets of the world as possible.” Design Squad Global is well on its way to this goal with over 700 clubs from 40 different countries, including 46 states in the United States. “We don’t ever want to limit who is allowed to use our materials. We have clubs in libraries, museums, boys and girls clubs, the YMCA, and also a lot of institutions and schools,” Sirianni said.

According to the Congressional Joint Economic Committee, only 14% of engineers in the U.S. are women with about 18-20% of engineering students being women. Likewise, according to the NACME (National Action Council for Minorities in Engineering), in 2013 minorities accounted for only 12 percent of employed engineers, a number that paled in comparison to their representation in the overall population.

While these numbers are up from past decades, clubs like Design Squad Global hope to encourage further participation in STEM fields from people of all backgrounds. Speaking to this issue, Sirianni said, “We want to make engineering relevant in their everyday lives. There are a lot of stereotypes about who is allowed to work in engineering and we want to break down those stereotypes. The whole purpose is to get kids really excited about engineering.”

One of the first projects tasked to the Design Squad Global club was the creation of shoes from a variety of found materials including tape, Styrofoam, bouncy balls, foam, felt, bubble wrap, cardboard, batting, cloth, and sponges. Helisek described the differences in the Halifax students’’ approach and the Kenyan students.

“We tried to design them to be more functional so that we could actually wear them where theirs seemed like they were more focused on how they looked; a lot of them had really cool designs and colors.” Kullen Martin added, “The Kenyan students’ were more sandals for their weather where ours were more like boots and sneakers.”

Kai Martin explained another project, “We had one where we built a light pipe where we had to illuminate the inside of a cardboard box.” Ethier again stressed the Kenyan focus on design saying, “They looked like little houses. Again, with like the designing, we tried to make it functional and they tried to make it look good.”

While the Kenyan club and Halifax club came up with significantly different solutions to the same problem for some of the projects, this was not always the case. Helisek explained, “We did one where we had to shoot airplanes down the line and learn about turbulence. I was a little shocked that ours were extremely similar designs, our group and their group.”

The exchange of cultural information between the clubs was a focal point of the experience with both the Kenyan and the American students learning a lot about the way the other lives.

“They asked what the weather was right then and it was pretty cold then and I was telling them how our seasons are much more drastic than theirs. They looked a little surprised when we said how cold it was,” Ethier said. Hinkley added, “I think the reason they were so surprised was because Kenya is split by the equator so it is very warm. They have two seasons – the dry and the rainy season.”

Other differences also stood out to the groups. The Kenyan students were surprised to see that the American students were not wearing uniforms. Helisek was surprised by the age ranges in the Kenyan club saying, “I think they had from kindergarten to eighth grade. I was surprised that they had the younger grades and the older grades together.” Kai Martin added, “They were talking about how we took the bus to school and they said that they either walked or did chores in the morning or rode their bikes. They were surprised that we either took cars or rode the bus to school.”

The differences in languages spoken by the clubs also came as a surprise to both groups. For his part, Kullen Martin was impressed with the Kenyan students’ grasp of the English language saying, “Since you don’t really get to hear from people from another country often, you don’t really think they speak English as well or as fluently as they do so that was kind of cool.” Hinkley explained, “In Kenya they speak Swahili which is their national language, they speak English, and then they speak whatever their tribal language is.” The students reminisced about the Kenyan students attempts to teach them some words in their language, including jambo for hello.

A fun moment for both clubs came when Hinkley, who traveled to Kenya a few years ago with family, showed off some souvenirs from his travels during one of the video chats between the clubs. “I brought in a shirt [Kenyan soccer shirt], some money, a soapstone rhinoceros, and a bunch of animals that my grandparents brought me back many years ago,” Hinkley said. “I think they might have been the most surprised when Will had the stuff too, like the soccer shirt and the animals,” Helisek said. Kullen Martin added, “Will showed them he had just a random lego brick. They were sort of surprised when he pulled that out just to sort of see what we had as toys.”

For all the differences they discovered, the students definitely discovered some similarities as well in the form of hobbies and supervillains. “I didn’t know they could draw so well. There was this one kid that wanted to know our talents but then he showed us a picture of a drawing that he did of the joker and it was really good,” Ethier said.

When asked what was the best part of Design Squad Global was for them, the students emphasized both the cultural exchange and engineering aspects of the experience. Kullen Martin, who hopes to one day become a zoologist, said he was most excited about working with people in older grades, both at home and in Kenya. Older brother Kai, who would like to study architecture, said, “I thought the coolest part was the light pipe because we got to do something that hasn’t actually been put in place yet; that was the sort of thing that we really got to engineer and we might get to make in our later life.” Hinkley, who’s ambition is to become a civil engineer, said, “I enjoyed listening and learning from other people because other people had ideas that were so much different than mine. I learned some things from these people [motioning to his friends] but I also learned stuff from the people in Kenya.”

Both Ethier and Helisek were most enthralled by the opportunity to interact with people from another culture. Ethier who wants to one day become a veterinarian shared her thoughts.

“I think my most favorite part was interacting with the people in Kenya. The Facetime call was so amazing, I would never dream of meeting people in a whole different country. They were pretty funny and it was just cool how we got to talk to them.” Helisek, who hopes to become an elementary school teacher, said, “I liked how we got to interact with people from another country to see how they worked differently than we did.”

The Plympton Board of Selectmen met virtually on the evening of Monday, Jan. 23. Chair Christine … END_OF_DOCUMENT_TOKEN_TO_BE_REPLACED