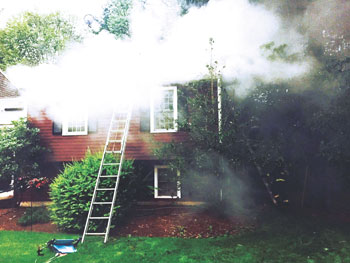 A house on Firefly Lane, Halifax, caught fire Tuesday after the morning’s round of severe weather. The Town Hall also also suffered a hit, but sustained no structural damage. Photo courtesy of Halifax Fire Department.

Halifax Fire Department responded to a house fire at 45 Firefly Lane, off Thompson St., after a reported lightning strike at 7:13 a.m. Tuesday.

The owners were downstairs at home when they heard a tremendous bang. They went upstairs to find heavy smoke, according to Halifax Fire Chief Jason Viveiros.

The incident quickly went to two alarms in response for manpower due to poor visibility and heavy rain.

Evidence indicated that a tree and side of the house were struck, Viveiros said, and an electric outlet was blown out from the charge of the bolt.

Heavy fire was visible on the second floor and attic, he said.

Due to the smoke and water damage and loss of power to the house, it was deemed uninhabitable.

Early estimates put the damage to about $150,000. No injuries were reported and the residents evacuated while they called 911. 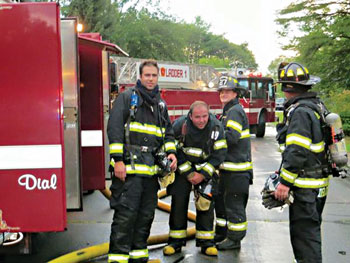 The Halifax Town Hall was also struck moments before the house fire. The fire alarm system was impacted, but here was no fire or damage to the Town Hall structure. 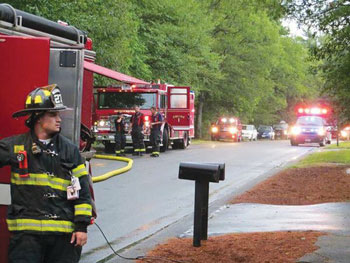 If you want to call a turkey, just talk to Randy Sullivan.   He can give you a lot of choices that … END_OF_DOCUMENT_TOKEN_TO_BE_REPLACED