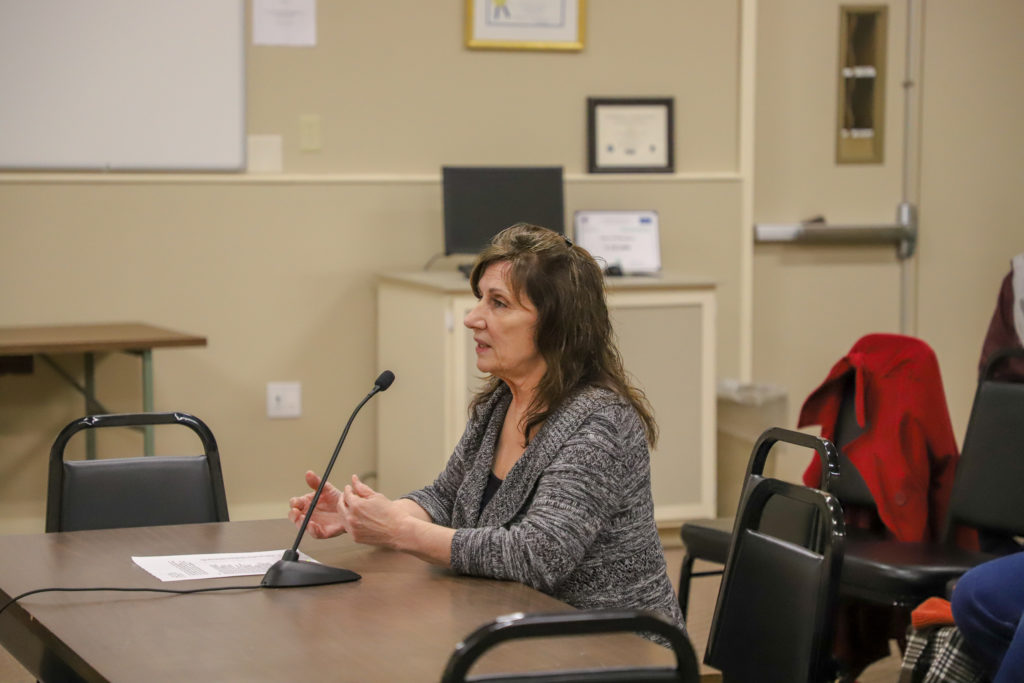 Professional grant writer Terry Walker discusses a potential position with the town before the Plympton Board of Selectmen on Monday, Jan. 28, 2019. (Photo by Abram Neal)

PLYMPTON — The Board of selectmen met Monday, Jan. 28, and furthered discussions with a grant writer, did not exercise their right of first refusal on a portion of an Upland Road Chapter 61A property, discussed the awarding of the fire station exhaust removal system project and met with Karen Foye, moderator of the Plympton Helping Plympton Facebook group, who donated photography from the group after an online contest to decorate the Town House.

Terry Walker, of Tolland, in the western region of the state, was before the board to further formal discussions of bringing her to Plympton as a grant writer. She would work remotely, if hired, as she says it is more than a two-hour drive for her to come to Plympton.

She attended grant writing seminars sponsored by officials from Washington, D.C., and completed the Commonwealth Capital Application, part of a town’s Master Plan. (The points received qualifies the town for more grant funding, she writes.)

The board is excited about the possibility of the opportunity to work with Walker and bring more grants to Plympton.

Town will not buy lot
lot out of Chapter 61A

An approximately 1.561-acre parcel of land of a Chapter 61A property located on Upland Road, (a portion of Map 12, Block 3, Lot 1), owned by the Margaret Keirstead Revocable Trust, has been passed over by the town. The town had a “right of first refusal” on the property because of its Chapter 61A agricultural use tax status. Because it is being sold, and taken out of agricultural use, the town had a right to acquire it before the sale to a private buyer went forward.

Although the Kiersteads had been seeking to move the sale along more quickly than the town’s process allowed, the board, at a very brief public hearing, voted against attempting to acquire the parcel.

Town Administrator Elizabeth Dennehy will provide a letter with the determination to assist in the closing.

The contract for 18-PFD-2, an engine exhaust removal system for the fire station, which is necessary for the station to be occupied as Massachusetts becomes an “OSHA-compliant” state where cities and towns must meet federal safety requirements they have previously been exempt from– has been awarded to the second-lowest bidder, Air Vacuum Corporation of New Hampshire, for $24,662, just under the $25,000 that Dennehy expected the contract to cost.

The Plympton Fire Station, with six firefighting and emergency vehicles parked inside, does not have room for a system where hoses can connect directly to the exhaust pipes of vehicles. The lowest bidder could not supply a “hose free” system that would work in the tight confines of the station, therefore the second-lowest bidder was awarded the contract.

Fire Chief Stephen Silva said that this is the first step in firefighters being able to fully occupy the building and to removing the trailer outside the station where first responders spend the night.

Board thanks Karen Foye

Karen Foye, in concert with Christine Kelly, the town’s assistant treasurer/collector, arranged for a photography contest on the Facebook group that Foye runs, Plympton Helping Plympton, and had some of the winning photos enlarged and printed to be displayed at the Town House.

The photos, which have been hung around the building, depict scenes from all over town, from sunsets to flowers.

“We’ve been trying to get some things done cheaply or for free around here,” said Selectman Chairman John Traynor, who said he was pleased with the photographs.

Selectman Christine Joy asked if the photographers would be interested in having their names on the photographs, and Foye said she’d look into it.

In other BOS news:

• Patrick Ganley, with the support of his family, proposed his Eagle Scout project to the board. He is planning to spend one or two weekends this Spring fixing up the flag pole in front of Town House. The selectmen enthusiastically gave their support to the project.

• Fire Chief Stephen Silva attended the meeting to thank the Upland Club on behalf of the town and presented Mark King of the Upland Sportsman Club a plaque for the Club’s donation of an unused house that area local and federal public safety workers used to practice life-saving techniques, including live-fire burns and drills.

• The board delegated further authority to Town Administrator Elizabeth Dennehy to sign documents on their behalf in their absence, should an emergency need arise.

• The board adopted its official version of their 2019 goals for the coming year; they discussed them at a previous working meeting reported on by the Express.

The Plympton Board of Selectmen met virtually on the evening of Monday, Jan. 23. Chair Christine … END_OF_DOCUMENT_TOKEN_TO_BE_REPLACED