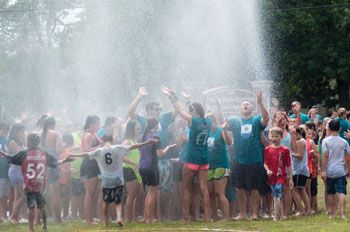 More than 350 burgers and hot dogs were served hot off the grill on a day campers felt equally sizzled on the field as the Drug Awareness Resistance Education (DARE) Camp was held for youths from 19 towns on the South Shore at WHRSD last week.

Cruz congratulated Frazier on his first and very successful DARE camp week. The DA had attended several events and said he was pleased at the success of the camp over the last two decades.

“We have had more participants than any other year.  The campers are learning about safety, respect, drug awareness and anti-bullying,” said Cruz.

Chief Patrick Dillon of Plympton, Deputy Chief Hanlon of Whitman, Chief Michael Miksch of Hanson and many other officers, lieutenants and volunteers were on hand for the chock-full week.

“These campers are going to sleep good tonight and so are we,” the officers agreed.

With Mother Nature on their side, sunny days allowed for lots of water play, games, cold snacks, an ice cream party and positive peer interaction.

Officer Dana Smith of Plympton has also been involved with the camp as a resource officer for four years, he said.

“It is not just the officers who interact with the kids but the peer leaders who kids are looking up to. I think DARE Camp has been a great thing for kids,” he said.

The campers were surprised by Kristen Merlin’s appearance during graduation. The hometown finalist of  NBC’s reality competition show, “The Voice,” sang the national anthem and congratulated campers on their accomplishments.

She told campers she had also attended camp, “back in the day.”

The pilots spoke with campers during a question and answer session and a visual tour inside of the aircraft was offered before the chopper left to the enthusiastic applause of campers and staff.

Amp 103 Radio station DJs  made a visit providing music for all the field events on Tuesday.

As each day wrapped up leaders and officers sent home hundreds of worn out kids — many covered in popsicle syrup and mud — hoping they learned countless lessons about positive choices to take along in their journeys of life.

See more pictures of the event at the Plympton-Halifax Express Facebook page.

The Plympton Board of Selectmen met virtually on the evening of Monday, Jan. 23. Chair Christine … END_OF_DOCUMENT_TOKEN_TO_BE_REPLACED