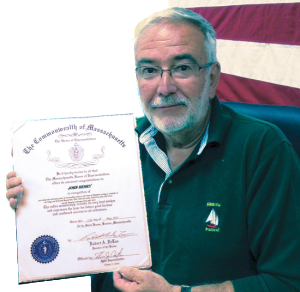 Monday night, May 11, marked the last meeting of the Plympton Board of Selectmen for John Henry, who did not run for re-election.

Henry served the people of Plympton for eight years, two full terms and a partial term where he was elected to fill a vacancy. Monday night brought Representative Tom Calter with a proclamation from the Massachusetts House of Representatives signed by Speaker of the House Robert Deleo and Rep. Calter, citing Henry for the work he has done through the years.  Calter told Henry that he hadn’t seen any selectman in his State House office as often as he had seen John Henry throughout the years.  Calter lauded Henry for his dedication and hard work.

Jack Doyle, a member of the Plympton Board of Health, spoke about Henry’s work on behalf of the town and Henry was visibly touched by the sentiment of his colleague.

Chairman of the Board of Selectmen Mark Russo lauded Henry’s financial acumen, and noted that the board would miss that talent, as well as his work with solar contracts and protocol in town.

Speaking to the well-wishers in the audience, Henry said, “I’ve got one more dance left – Town Meeting Wednesday night.”

If you want to call a turkey, just talk to Randy Sullivan.   He can give you a lot of choices that … END_OF_DOCUMENT_TOKEN_TO_BE_REPLACED