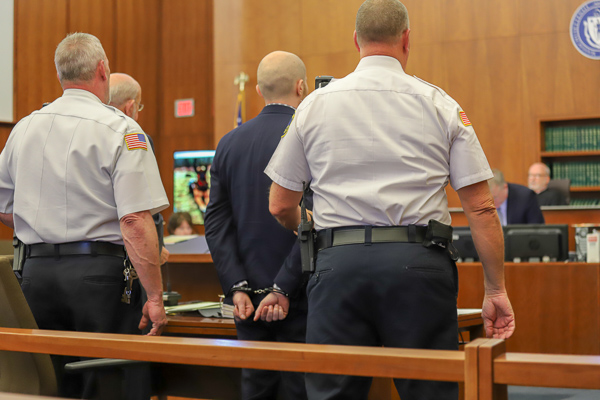 Justin Kilburn is led away in handcuffs to begin his not less than five but not more than six year sentence at MCI-Cedar Junction. He has 14 days to appeal. (Photo by Abram Neal)

PLYMOUTH —Justin Kilburn, 30, of Links Way, Kingston, was found guilty of one count of motor vehicle homicide by OUI in the death of Diane Giordani, 52, of Plympton, and her German Shephard dog, Blitz, by Judge Cornelius J. Moriarty, II, Wednesday, May 8, after an emotional, jury-waived trial in Plymouth Superior Court in Plymouth. The three-day trial occurred just days before the one-year anniversary of the fatal collision.

The self-employed father of two was acquitted of one count of motor vehicle manslaughter by OUI.

He had a blood alcohol content level of 0.17%, more than twice the legal limit, when he caused the collision, said the district attorney’s office, and this was not his first alcohol-related driving offense.

According to trial testimony, shortly before 6:11 p.m. May 10, 2018, multiple bystanders came running after hearing what they variously described as a loud pop or boom and came upon a two-vehicle head-on collision on County Road (Route 106) in Plympton, near the Halifax town line. They found a white pickup truck on fire and a black car in the woods.

State police investigators estimated that Kilburn was traveling 67- in a 40-mph zone around a curve in the road.

Kenneth Payne, a carpenter from Kingston, testified that Kilburn’s white pickup truck passed his vehicle at a high rate of speed seconds before the collision.

Another witness, Joanne Hudson, formerly of Kingston and now of Hilton Head, South Carolina, testified she was traveling to a wake from Kingston when a white pickup truck crossed the center line and almost drove her BMW off the road, also just seconds before the collision. 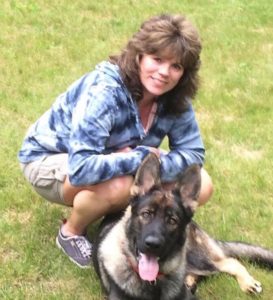 Three Plympton police officers, who happened to be only hundreds of feet from the collision, also heard the crash. They arrived within moments, according to trial testimony. Bystanders also called 911, and firefighters and additional police arrived momentarily.

Giordani was found dead at the scene.  State Medical Examiner Dr. Henry Nields testified cause of death was due to blunt force trauma to the head and extremities.

Plympton police officer Douglas Mazzola, who knew Giordani, testified he watched 5-year-old Blitz crawl up next to her and perish at the scene as well. “The dog got up, laid down next to Diane, and expired,” he said.

It took between two and three hours to extricate Giordani from her vehicle using the Jaws of Life, according to police testimony. The prosecution used graphic photos of the mangled vehicles throughout the trial, and Giordani’s black Nissan X-Terra was so damaged it was unrecognizable as a vehicle in the images.

Giordani’s husband, Michael, testified that she was going to dog training in Bridgewater on the day of the collision, one of her favorite activities. In a victim impact statement, Giordani’s sister, Stephanie, said that Giordani had been cleared of having Multiple Sclerosis the day before she died.

Kilburn, who was initially unresponsive at the scene but came to after police and paramedics performed CPR, was medflighted to Rhode Island Hospital for treatment of his injuries. He told paramedics that he had consumed beer and nips while fishing earlier in the day, according to testimony.

Police said he was ejected from the vehicle and they found him bleeding in the middle of County Road.

Kilburn appeared at several pre-trial hearings and conferences limping with a crutch, although he stood tall and looked straight ahead throughout the trial. He showed emotion only when Michael Giordani testified, tearing up when photos of Giordani were displayed on a television.

Kilburn did not testify in his defense. He was represented by Plymouth-based defense attorney Jack Atwood, who did not call any witnesses and waived an opening statement.

“Anybody who’s driven a car would recognize the danger this behavior puts others in,” stated assistant district attorney Russell Eonas in his closing arguments. “I would suggest this case started long before he [Kilburn] got behind the wheel.”

Moriarty warned the gallery, which was filled with family and supporters of both Giordani and Kilburn, to not react emotionally to his verdict – which he said would possibly please some and upset others – or be held in contempt of court.

The room remained silent as Moriarty rendered his verdict and moved into sentencing after hearing Giordani’s sister’s victim impact statement, calling it an “egregious” case.

Kilburn did not visibly react when found guilty or sentenced.

He was advised by the clerk that he stood committed and could appeal the verdict within 14 days.

“The loss of Miss Giordani and her companion Blitz was devastating to her family members, who were in the courtroom throughout this trial,” district attorney Timothy J. Cruz said in a release Wednesday. “I am hopeful that with today’s conviction and sentencing of Mr. Kilburn, this family can finally find some peace.”

Neither Atwood nor Kilburn made any comment throughout the trial.

The Plympton Board of Selectmen met virtually on the evening of Monday, Jan. 23. Chair Christine … END_OF_DOCUMENT_TOKEN_TO_BE_REPLACED