An angry crowd left Monday night’s selectmen’s meeting with now former Fire Chief Warren Borsari.  Selectmen announced their decision not to renew Borsari’s contract that runs through June 30, and placed him on paid administrative leave until that date.

Borsari would not be allowed to re-enter the fire station, except accompanied by a town official to collect his personal items.

Many in the audience, filled with people supporting Borsari, spoke in his defense, citing the actions of the selectmen were unwarranted and unduly harsh.

Jack Collins, an attorney introducing himself, said he often represents fire chiefs in his profession, and then lobbed various grenades into the already fired-up crowd, saying that if the audience believed that the decision not to renew the contract was just made Monday night, he “… had a bridge to sell you.”

Collins also said that if the townspeople wanted to take back their town from this board, they should look up how to hold a recall election.  He further said  that he had never seen a town put someone on administrative leave like this.  “What do we do next?  Could the Board of Selectmen change their minds? Not likely… All this was already in place …  the political process is yours,” he told the group.

Selectman Chairman Christine Joy responded that she is up for re-election in May.  Her vote not to renew the fire chief’s contract was based on many issues, and she stands by her decision. 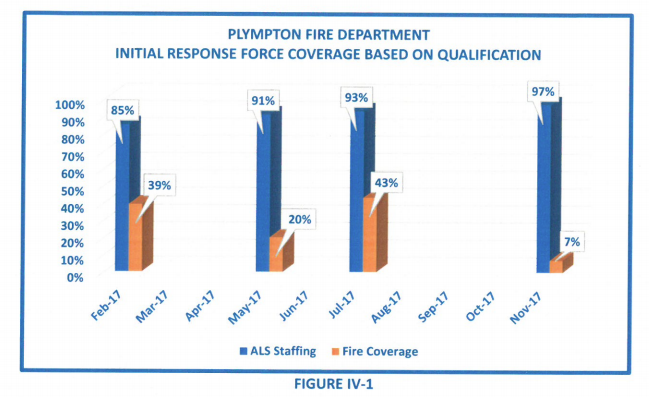 A member of the audience who did not identify himself asked about the grant that had been awarded to Plympton for the purpose of studying the feasibility of combining the Halifax and Plympton Fire Departments. “And, I understand that Halifax got an even bigger grant!”

Joy answered that it was just that, funds to support a study.  It is the next logical step “to examine our options,” she said.

Joy told the group that Municipal Resources, Inc., will be at the next meeting of the Board of Selectmen, Monday, March 19, to present their report, and invited all to attend. Many indicated they would do just that.

The Fire Department had submitted a letter to selectmen signed by a couple dozen members in support of Chief Borsari. 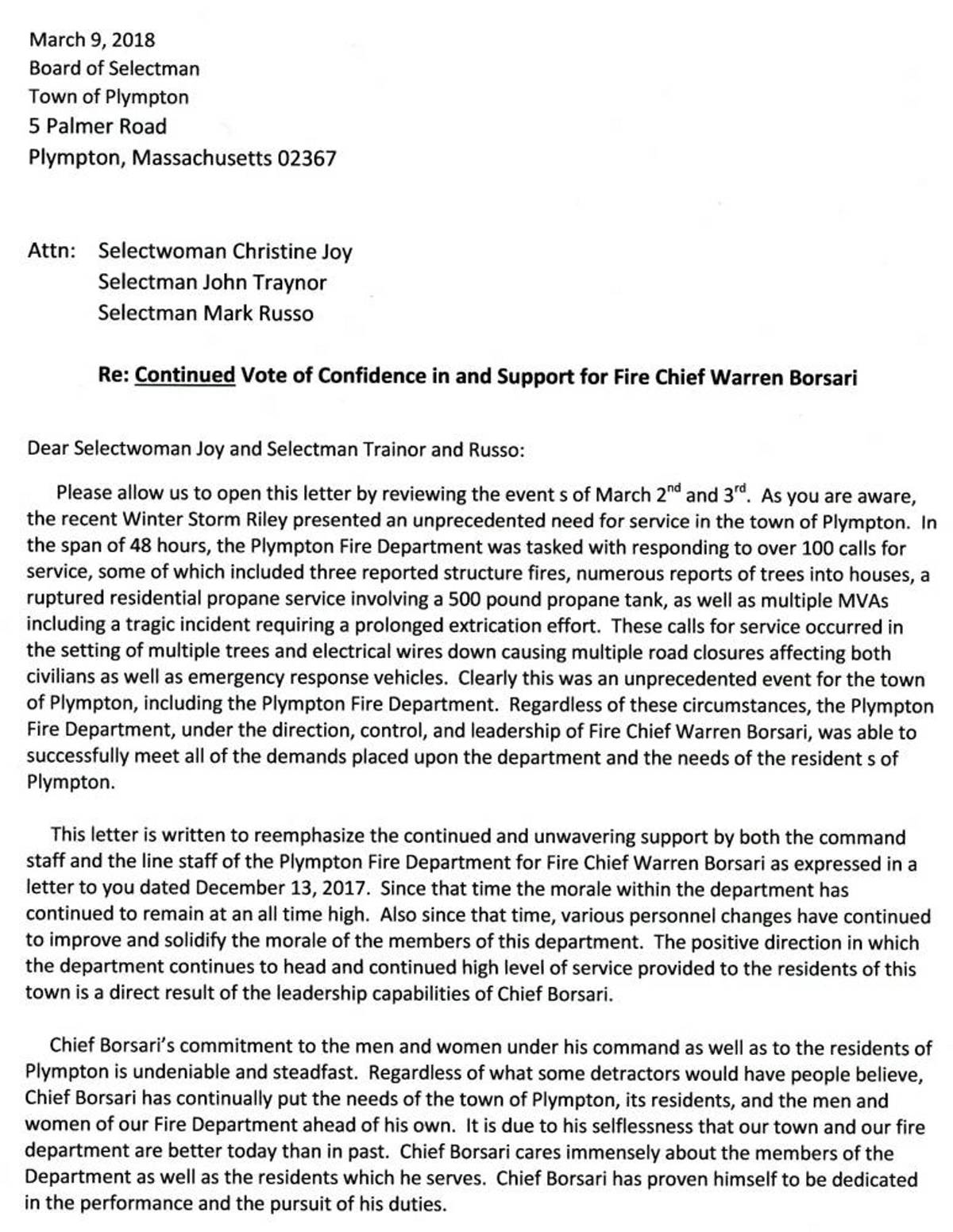 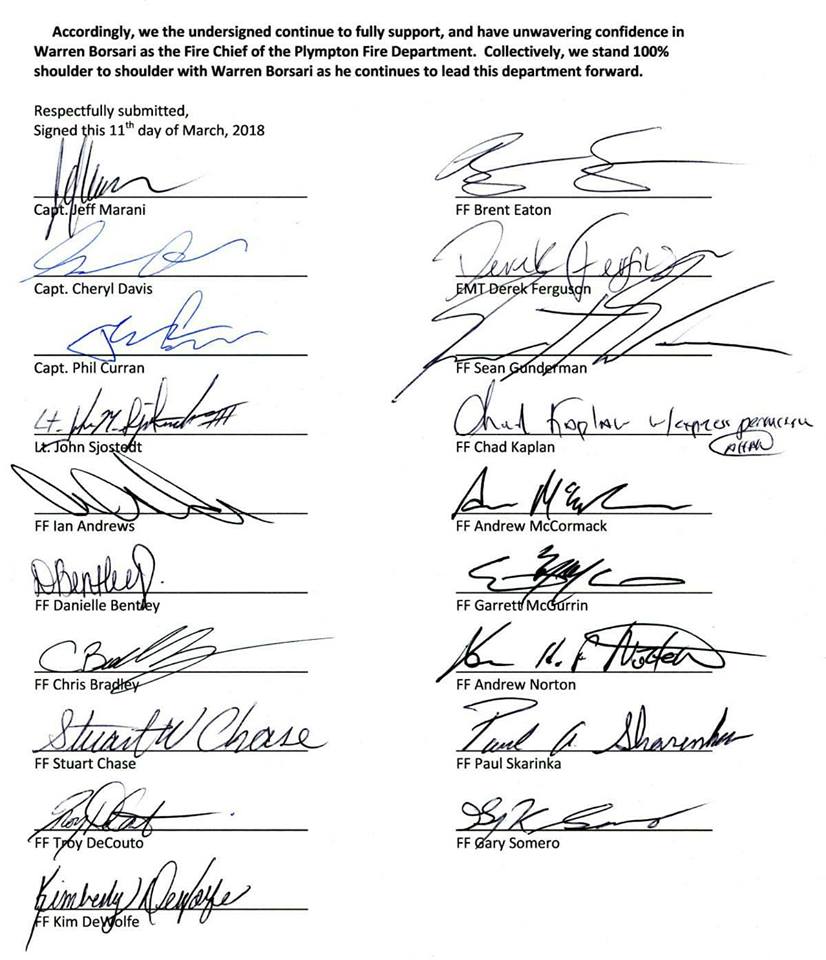 A 108-page report by the firm Municipal Resourses, Inc., was released Monday night on the town’s web site, and cited breaches in protocol that could be harmful or dangerous, and leave the town open to litigation as a result.

Among these were the cabinet, where drugs and controlled substances for the ambulance service are stored, left unlocked, with the hasp of the padlock open, when an MRI representative stopped for a field visit.  Such violations of security can leave the town open to significant liability and put the department’s Advanced Life Services provider certificate from the state at risk.  “This type of security breach is unacceptable and reflective of deeper administrative oversight and supervision deficiencies within the organization,” stated the report on page 31.

Training of the members of the Plympton Fire Department was called into question throughout the MRI report, calling for the town to support the department in more training for its members and to set minimum standards for each level of office.

The Plympton Fire Department’s stated goal was to staff its station with a two-person cross/trained Initial Response Force (IRF) to be available to answer any call, whether for medical or fire suppression.  According to the data provided by Chief Borsari, and the data collected by MRI, the department does a good job at staffing the ambulance at the ALS level, but “having trained fire coverage as part of the IRF appears to be rarely achieved.”

The MRI report also stated that more than 50 on-call personnel have been terminated from the department since January 2014.  “There are widely divergent perspectives within the department regarding the reasons for these terminations or separations.  This situation certainly contributes to the perception that there is less than a true commitment by the department leadership to the call force.”

If you want to call a turkey, just talk to Randy Sullivan.   He can give you a lot of choices that … END_OF_DOCUMENT_TOKEN_TO_BE_REPLACED